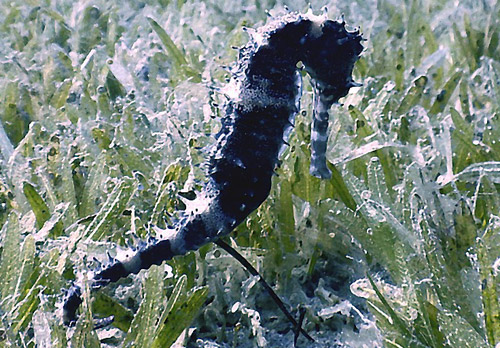 Seahorses have a horse-like head, monkey-like tail, and kangaroo-like pouch. Their eyes are like a chameleon’s. They move independently of each other and in all directions. Instead of scales, seahorses have thin skin stretched over a series of bony plates that are visible as rings around the trunk. Some species also have spines, bony bumps, or skin filaments protruding from these bony rings. A group of spines on the top of the head is called the coronet because it looks like a crown.

While seahorses appear to be very different from other fishes in the sea, they belong to the same class as all other bony fish (Actinopterygii), such as salmon or tuna.

Seahorses are masters of camouflage, changing colour and growing skin filaments to blend in with their surroundings. Short-term colour changes may also occur during courtship displays and daily greetings. Male and female seahorses can be told apart by the presence of a brood pouch on the male.

Seahorses are flagship species, charismatic symbols of the seagrasses, mangroves, coral reefs, estuaries and seaweeds where they make their homes. Protecting seahorses means protecting these diverse habitats all of the marine life that lives therein.

From birth, man carries the weight of gravity on his shoulders. He is bolted to earth. But man has only to sink beneath the surface and he is free.

- Jacques Cousteau
The sea, once it casts its spell, holds one in its net of wonder forever.